Home FASHION Is It True “Yoga Pants Are Bad For Women!”?

The New York Times Opinion section is back with another searing hot take, folks. Get this: yoga pants… are bad for women.

Never mind that the whole ‘leggings aren’t pants’ debate was settled in like 2011, when we all agreed it was an insane conversation to keep having. Never mind that the NY Times Opinion section has cultivated a reputation for offering nuanced piece into the lives of your local white supremacists, and fired an editor six hours after hiring her when Twitter users pointed out her long history of doing racist and homophobic posts.

No no, the real issue is yoga pants. Why are women wearing them to their dumb yoga classes when they could be wearing trackies?

“At this moment of cultural crisis, when the injustices and indignities of female life have suddenly become news, an important question hit me: Whatever happened to sweatpants?” writes senior writer Honor Jones, without a single trace of irony.

“No one looks good in sweatpants. But that’s not the point. They’re basically just towels with waistbands. They exist for two activities: lounging and exercising – two activities that you used to be able to do without looking like a model in a P90X informercial.” 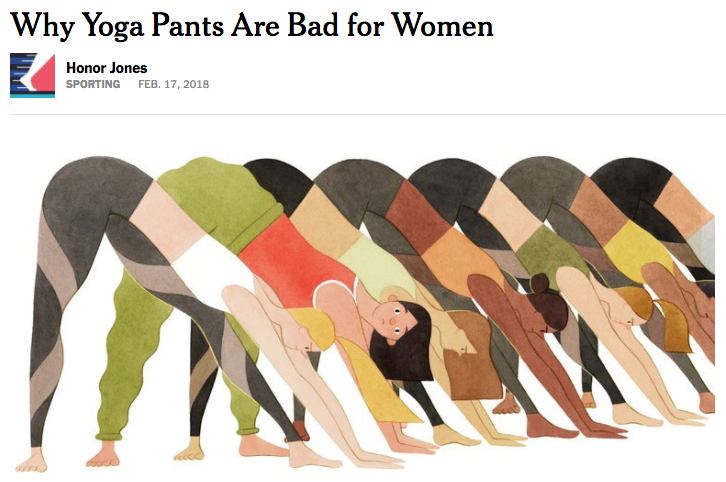 While Jones acknowledges that it’s “not good manners for women to tell other women how to dress”, she goes on to spend 800 words doing exactly that.

She also demonstrates that she’s probably never attended a yoga class in her life, and therefore might not be well-suited to writing about the appropriate attire.

“Seriously, you can’t go into a room of 15 fellow women contorting themselves into ridiculous positions at 7 in the morning without first donning skintight pants?” she writes.“What is it about yoga in particular that seems to require this? Are practitioners really worried that a normal-width pant leg is going to throttle them mid-lotus pose?”

Uh, yes, as a matter of fact. I don’t know if you’ve ever sweated your way through a yoga class but sometimes finding grip on your legs – a feat impossible with a few extra inches of fabric – is the difference between life and death-by-embarrassing stack.

Jones’s main crux seems to be that women are spending quite a bit of money on wellness, gym classes and activewear, which is a valid and interesting point of discussion. Let’s talk about the business of wellness. Let’s talk about how women are disproportionately being encouraged to spend their money on looking good, or how Lululemon has the audacity to charge $100 for see-through leggings.

But Jones’ handling of the entire issue is so clumsy that it basically comes down to, “Stop trying to wear appropriate gear, dummies,” without delving into any issue further than “I, Honor Jones, don’t like it.”

First of all, the gym is a great place to focus on how you look. There’s mirrors everywhere so you can watch your form as you’re doing the exercises.

Second of all, who gives a damn about how people look when they’re working out. Honestly. You wanna look hot? Great! You wanna wear your oldest, daggiest t-shirt? Fine! Personally speaking, buying activewear that makes me look good is insanely motivating for getting the gym – or studio, another thing Jones has bizarrely decided is bad – in the first place.

It should come as no surprise that the piece is getting absolutely shredded online.

Honestly, who knows? It’s not even the most insane thing the NY Times Opinion section has done this month. Have a read of the article here, just don’t slip in the internalised misogyny on your way over.

9 Surprising Reasons You’re Not Getting Pregnant Right Away

7 Yoga Asanas To Tone And Lift Your Buttocks